In 2017, Parmigiani Fleurier unveiled the Toric Chronomètre, a contemporary reworking of the first watch designed by Michel Parmigiani. The brand recently revisited the aesthetics of this flagship model, introducing an eye-catching dial decorated to evoke the spiral pattern of a pine cone.

“The decoration is so captivating because it is based on the Golden Ratio. Within it, you see Fibonacci’s spirals, reproducing a harmony that is everywhere in nature.” This is how Michel Parmigiani describes the hand-guilloché dial of the Toric Chronomètre. Its concentric pattern evokes the arrangement of the scales on a pine cone – one of the innumerable examples of the Golden Ratio seen in the natural world.

Hand guilloché is an artisanal technique, of which few manufactures have such a fine mastery, in which the material is engraved to produce a repeating decorative pattern. At 12 o’clock and 6 o’clock respectively, the elliptical Parmigiani Fleurier logo and the word “Chronomètre” used by COSC (Swiss Chronometer Testing Institute) stand out from the dial’s decoration. The javelin-shaped hands are partially openworked, making them even more discreet to complement the subtle minute track around the circumference and the finely proportioned Arabic numerals.

The Toric’s aesthetic impact and unique character come from its bezel, which features a hand-knurled design. Since the Toric was created in 1997, each piece has passed through the expert hands of the same craftsman in Le Noirmont (Jura), who has produced every one of the Toric bezels. Knurling is a rare and distinctive art that consists of manipulating the material with a wheel that leaves the imprint of its notches in the metal. This work requires the craftsman to be both delicate and firm. Before starting, he must remain composed, as even a single imperfection will mean starting again from the beginning. Each knurling design is unique, just like each Toric.

The rose gold case houses the COSC-certified PF441 proprietary caliber, which measures the passage of time in its most elemental form: hours, minutes, seconds and date. All of the components have been meticulously decorated to haute horlogerie standards. 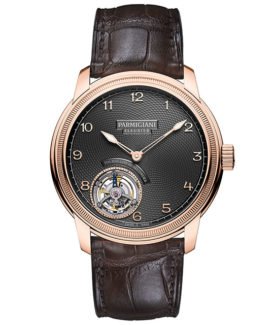