It all started in 2009. Bell & Ross likes to break the mold and relentlessly explore new worlds. That same year, the brand made a big impact with the launch of its BR 01 Skull, which dared to shake up traditional watchmaking codes.

Today, B&R is unveiling the BR 01 Cyber Skull. This timepiece revisits the art of the skull watch. Its design is far from the vintage style usually associated with the Skull, to establish itself in contemporary modernity. It projects this art born in the 20th century into the future. A watch with several faces, it is where watchmaking, design, symbolism and bold creativity meet.

Generally speaking, skull watches from the Bell & Ross Skull family are rather traditional. The new BR 01 Cyber Skull marks a break with style. It turns a page. Its avant-garde design sends this iconic series into the future. Not only that, the Bell & Ross brand as a whole has launched itself towards an ultra-modern shape. The futuristic Cyber Skull opens a door to the future.

With its cut sides and sharp edges, the angular silhouette of the BR 01 Cyber Skull is reminiscent of that of certain fighter planes described as invisible. Its case is modelled like the fuselage on an F117 fighter plane. To disappear from the radar and seem invisible, these bombers had faceted fuselages that waves would ricochet off. All their surfaces were faceted, making them almost undetectable to radars. This stealth technique is also used on the most sophisticated military ships, in order to conceal their visual identity as much as possible.

Bell & Ross has chosen to adorn its Cyber Skull with black matte ceramic. This anti-reflective color is also used on some military vehicles. Its glazed superstructure is reminiscent of the canopy on a jet. More than just a color, the new black matte used on the watch gets its depth from a ceramic used to match its design. Its lines, structured like those of a fighter plane, pass under the radar and establish a new language.

In sharp contrast to classic watchmaking shapes that favor curves and roundness, the architecture of the new BR 01 Cyber Skull exonerates it from traditional design and allows it to establish its creativity. All whilst respecting its military and aviation roots. Each element of the watch, the case middle, bezel, crown, skull, crossbones, is structured within the many faces that sculpt the surfaces, creating volumes and a 3D image. To escape the radar but attract attention.

Only perfect mastery of the operation of a mechanical movement could, in reality, conceal the BR-CAL 206 hand-wound movement under the faceted decoration. To make it invisible to the eye, the main plate closely follows the shape of the skull, while the bridges extend up to the four corners of the case, hidden by the tibias. An architecture like this makes the skull appear to float weightlessly inside the case. An impression which is enhanced by the total transparency of the dial, highlighted solely by 12 baton-shaped indices. Only when the watch is turned over is the key to the mystery revealed through the sapphire crystal caseback.

In addition to the hour and minute indication, the automaton movement activates the jaw which opens and appears to snigger when the spring is wound. Making up the brain of this skull – which has finally come to life – the balance spring reveals its oscillations. The beating of the same, serves as a reminder of the watch’s mechanical heart. 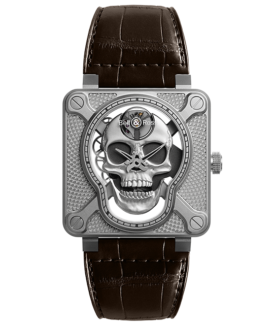