When Parmigiani Fleurier was founded in 1996, the first model that acclaimed watchmaker Michel Parmigiani created was the Toric. The watch — with its distinctive hand-knurled bezel — is still a favorite of his and one he continues to wear today.

So it was no surprise last year when the master watchmaker turned his attention back to the Toric collection. For the next generation of Toric timepieces, Parmigiani has refreshed the case design while maintaining the perfect harmony of function and form that’s been a hallmark of the Toric line for more than two decades.

Perhaps the most noticeable change is the new shape of the case lugs. Each one has a gently sloping contour that gives the watch a more modern profile. Just as important as the look, these new lugs are even more comfortable than before, offering a truly ergonomic fit. Another key aesthetic update was made to the crown, which is larger than previous incarnations without sacrificing the elegant understatement of the Toric’s overall design. 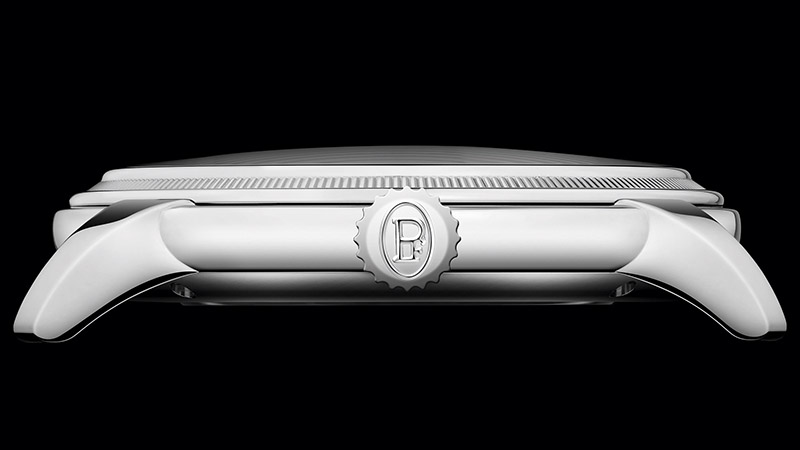 The Toric case features newly redesigned lugs that wear comfortably on the wrist.

One important visual element that remains unaltered is the collection’s signature bezel, which has been part of its design code from the beginning. According to brand, this pattern — which features alternating gadroons and knurling — was inspired by ancient Greek columns. Fans of the brand already know that the past has always been an important source of inspiration for Michel Parmigiani, whose manufacture in Fleurier is home to one of the world’s foremost workshops for clock and pocket watch restoration.

MASTER OF UNDERSTATEMENT
Parmigiani launched its newly revamped collection with the Toric Chronomètre, whose 40.8mm case is available in either white or rose gold. A refined expression of classical watchmaking, the Toric Chronomètre gets its aesthetic power from the clean, graphic dial design. Here, javelin-shaped hour and minute hands — both tipped with luminous material — dovetail nicely with Arabic numerals and a railway-style minute display. Near the bottom of the dial, a wide date window paired with the word “Chronomètre” complete the look.

The watch is available with either a glossy black opaline dial, or a white version that gets its naturally glowing grained texture from a process that includes being brushed with silver powder. The back of the watch, however, is an entirely different story. Decorative touches fill the open space with Côtes de Genève stripes, which are complemented by hand-finished angles. But the real star of the movement is the rose-gold winding rotor. It’s engraved with a gorgeous barleycorn-motif that plays with the light as it spins to fuel the watch’s 55-hour power reserve.

Made entirely in-house at the Parmigiani manufacture in Fleurier, the PF331 movement is a chronometer. That means its performance has been tested and certified by the COSC (Contrôle Officiel Suisse des Chronomètres), an independent authority that ensures watch movements meets stringent standards for accuracy. Made in-house, the automatic movement in the Toric Chronomètre is a certified chronometer.

AWARD-WINNING DESIGN
Parmigiani takes the Toric collection in a more complicated direction with the Toric Hémisphères Rétrograde. The watch dazzled judges at the prestigious Grand Prix d’Horlogerie de Genève, where it was awarded the 2017 Travel Time Watch Prize.

What elevates this watch above its dual-time contemporaries is the functionality of its automatic movement, which is made exclusively at the Parmigiani manufacture. Unlike nearly every other travel watch made today, the Toric Hémisphères Rétrograde features two separate time displays that are set independently. This allows the home and travel time indications to account for locations that observe non-standard time zones, like India which is offset by 30 minutes from standard GMT. This ability stands in stark contrast to similar watches, where the second time zone can only be adjusted to the hour. In addition, each time-zone display is paired with a dedicated day/night indicator that prevents any confusion about whether it’s a.m. or p.m. back home when you’re away. If this dual-time complication sounds familiar, that’s because it is. Parmigiani first introduced it nearly 10 years ago in the Tonda Hémisphères, a model that’s become a favorite among frequent travelers who appreciate its flexibility and intuitive functionality.

But the inspiration for this rare complication goes back even further. Naturally, it was a restoration project that first sparked Michel Parmigiani’s imagination. It began when a pocket watch arrived at his workshop that contained two movements, each one responsible for a single time zone. But instead of trying to squeeze two movements into a single wristwatch case, Michel Parmigiani found a way to offer the same functionality using a single caliber whose time displays were adjusted via two separate crowns. In addition to its dual-time function, the Toric Hémisphères Rétrograde also features a retrograde calendar. It uses a centrally fixed hand that advances around the bottom of the dial to indicate the date. At the stroke of midnight on the 31st of the month, the hand jumps back to the beginning in a motion that’s too fast to see with the naked eye. Like the Toric Chronomètre, the Toric Hémisphères Rétrograde comes with either a black opaline or white grained dial. The only concession to color on the dial is the date hand’s red, crescent-shaped tip.

With these new Toric timepieces, Parmigiani builds on its past successes to create watches that are destined to become modern classics.