“To fly, float, glide, navigate in the air, traveling from place to place; to surpass oneself, to go further, higher, faster; or, at a leisurely pace, to take the time to have one’s head in the clouds. L’Épée 1839 has previously included a number of flying objects in its collections, but today it presents the first to have offered mankind the gift of flight: the hot air balloon!”

Immediate boarding on the Hot Balloon, the mechanical clock in the form of a hot air balloon created by L’Épée 1839. This suspended clock follows the brand’s other co-creations – the Vanitas and Arachnophobia wall clocks. Placed simply on a table or suspended from the ceiling as if flying through the air, this kinetic sculpture symbolizes adventure and whimsy while remaining an exceptional mechanical timepiece.

An official partner of l’École Cantonale d’art de Lausanne (ECAL), and specifically its Masters program in Advanced Studies in Design for Luxury and Craftsmanship, L’Épée 1839 created this clock on the theme of travel in collaboration with the talented design student Margo Clavier.

Inspired by the hot air balloon and all that it represents – adventure, imagination, discovery, ambition, freedom – Margo and L’Épée 1839 unveil a mechanical clock with impressive, sometimes floating presence which displays the hours and minutes for eight days.

An authentic piece of watchmaking art, Hot Balloon can also be admired from below, just as one might view a hot-air balloon overhead, as is the very first mechanical clock that can be hung from the ceiling.

The clock is set and wound in either position through an ingenious system that combines form and function, design and engineering, precision and durability. To set the time, simply turn the wheel-shaped crown located in place of the balloon’s burner blast valve. Winding the barrel is less intuitive and rather unexpected: the key is the balloon’s basket. Simply turn the basket to power the mechanism.

Full of poetry, Hot Balloon comprises 207 components, all produced in-house at the L’Épée 1839 manufacture, and finished and assembled by hand by a passionate team. The clock, sometimes placed on a table, sometimes suspended, measures 31cm in height, and 17cm in diameter. 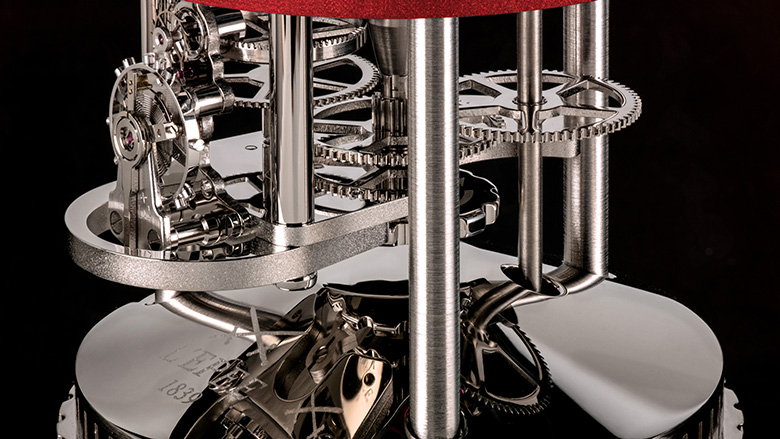 Whimsical, Exquisite, Creative: Designed by Margo Clavier, Hot Balloon embodies the dream of travel and adventure. As her first ECAL project, the collaboration with l’Épée 1839 offered a serious challenge: designing a mechanical clock. After visiting the manufacture in Delémont, Margo quickly seized upon the idea of the hot air balloon, which caused a worldwide sensation when it flew for the first time in 1783. Inspired by the aesthetics of the very first hot air balloons, Hot Balloon is an elegant contrast of visible mechanical parts and metal parts in a variety of finishes and refined decorations.

Every component of the mechanical clock is designed to resemble the parts of a hot air balloon: turning the basket winds the movement; the burners serve as the escapement; the flame indicates the hour and minutes; and finally, the envelope (the balloon), with its wide openings, lends the piece an imposing transparent, airy aspect. Table Clock or Suspension Mechanical Timepiece?: L’Épée 1839 has imagined its tethered flight in a very specific way, offering a completely new way of presenting time. Hot Balloon can be displayed on a desk, a table or a shelf, and it can also be hung directly from the ceiling, floating in air above it all – a first for a mechanical clock of this scale.

Hot Balloon is, therefore, be supplied with a suspension kit. A very thin cable, fully incorporated into the clock’s design, attaches to the hot air balloon, allowing it to take flight.

The time is displayed on the balloon’s burner; a two-pointed needle resembling a flame indicates the hours and minutes on two black cylinders stacked one on top of the other.

Winding the clock involves the whole basket. Regardless of how Hot Balloon is displayed, to wind the clock, simply turn the base several times (generally six turns), to provide enough power for eight days of flight. For greater ease of use, especially when Hot Balloon is placed on a table, L’Épée 1839 has also made it possible to wind the clock by turning the basket’s upper ring, to avoid having to lift the clock.

Mechanical Poetry and Whimsical Technology: To give the design an airy feel, while providing excellent stability, the balloon, which measures seventeen centimeters in diameter, was conceived as a hollow element, so as to allow light to pass through it. Incorporating complex, curved lines into the design was not insignificant for designer Margo Clavier. It is, however, a choice that demanded more from the engineers and machinists, since many hours of turning and machining are required to create this piece. A block of material had to be turned and machined to hollow out the balloon before creating its pockets and curves. The balloon is formed from one single piece, and a vast one in comparison to typical dimensions of watchmaking. The basket becomes the mechanical movement, and the mechanical movement becomes the basket. The design of Hot Balloon’s movement resembles that of a watch, but on a larger scale. The plate and the bridges of a watch’s movement become in this instance the two upper parts of the basket. The second level is, therefore, the primary, multi-level plate. The barrel and all its gear trains can also be admired from the underside of the basket through the mineral glass.

While a watch’s movement is often merely a technical component, sometimes visible but never exposed to the owner’s fingerprints, at L’Épée 1839, the movement becomes an object in its own right, designed to be touched, with all the resultant constraints and challenges for the finishes and surface treatments. This perfect combination of form and function is the well-known signature of the brand.

A Creation of Science, Ambition and Adventure: Humans have always wanted to fly: from Icarus to Leonardo da Vinci, not forgetting the wide-eyed child in every one of us. Early on, science identified the Archimedes principle, which although more commonly applied to liquids, can also be applied to gases. Drawing upon this principle of fluid mechanics, we can imagine an enormous balloon capable of lifting people up into the air. A bit of genius, and undoubtedly a significant element of folly, allowed the first hot air balloon to take off in the late 18th century, ready to fulfill the ambition and dream of exploring the skies.

The hot air balloon inspired numerous writers, philosophers, filmmakers and adventurers. To this day, it remains the symbol of new worlds, unknown horizons and great discoveries.