Ressence continues to change the way and the why we experience watches by introducing the third piece in its X collection. Collection X marks the first 10 years and brings the brand manifesto to life. Visually Ressence created a dedicated symbol for the collection that is the fusion of an X, or ten in Latin, and an hourglass. It sits proudly on the hour disc of the Type 3X.

Each of the four watches of the Collection X are limited to 40 pieces, with the dark olive-green color being the common thread linking all pieces. The collection focus continues to be the better utilization of time through design – graphically making us more aware of the importance of passing time. Stefan Sagmeister, a Ressence client, formed the New York-based Sagmeister Inc. in 1993 and has since designed for clients as diverse as the Rolling Stones, HBO, and the Guggenheim Museum. Having been nominated eight times he finally won two Grammies for the Talking Heads and Brian Eno & David Byrne package designs. He has also earned practically every important international design award.

In 2008 a comprehensive book titled “Things I have Learned in my Life so far” was published by Abrams. Solo shows on Sagmeister Inc’s work have been mounted in Paris, Zurich, Vienna, Prague, Cologne, Berlin, New York, Philadelphia, Miami, Los Angeles, Chicago, Toronto, Tokyo, Osaka, Seoul and Miami. He teaches in the graduate department of the School of Visual Art in New York and lectures extensively on all continents. A native of Austria, he received his MFA from the University of Applied Arts in Vienna and, as a Fulbright Scholar, a master’s degree from Pratt Institute in New York. After his studies he worked as a creative director for Leo Burnett in Hong Kong and for M&Co. in New York.

The Type 3X is part of the Ressence collection X but also of a larger project of Stefan Sagmeister that has to do with long term thinking. Short term media like Twitter and hourly news feed create an impression of a world out of control, with democracy in peril, ubiquitous conflicts and an overall outlook of doom. Even if you look at pandemics from a point of view of 100 years, you will see that the Spanish Flu killed 45 million people, Aids/HIV about 30 million people. This of course does not mitigate the unbelievable one million humans that lost their lives during Covid 19, but it does put the often-quoted view that we live in ‘unprecedented times’ into perspective. Looking at global development with a long-term perspective we observe that almost every aspect concerning humanity seems to be getting better. Fewer people go hungry, fewer people die in wars and natural disasters, more people live in democracies – and live much longer lives than ever before. 200 years ago 9 out of 10 people could neither read nor write, now it is just 1 out of 10.

The new date ring around the dial is composed of 280 colored lines: 140 blue lines and 140 orange lines. An overlayed grid allows the user to see only one of both colors at once. So, you have Blue days and Orange days. Each day at midnight the color changes from orange to blue or from blue to orange. One of these 140 lines has an inversed color. So if 139 lines are orange – one will be blue. This inverted colored line indicates the day of the month and rotates around the dial in 30 days. So, if the inverted mark is positioned at 15’, the user understands quickly that ¼ of the month has passed. The utilization of the date mechanism into a loop of changing colors is an attempt to remind the wearer to look at the world not one day at a time, but from a much longer point of view.

Winner of the 2013 GPHG award, The Type 3 is the first-ever oil-filled mechanical watch. A true achievement in Fine Watchmaking, the Type 3 is designed with a “water drop” dial effect in order to achieve crystal-clear dial legibility for the wearer. Ressence ingeniously designed a two-chamber system inside the Type 3 and a magnetic transmission to connect the two. The lower chamber is comprised of the customized automatic movement and the upper chamber is hermetically sealed with the 215 components ROCS display module bathing in oil.

The Type 3X’s dial graphics have been redesigned by Stefan Sagmeister. The day and the oil temperature subdials share the same lines as the date. The minute track bears the “Now is Better” sentence in a rather subtle manner and the hour dial has a distinct numeral font. The olive-green dial color exquisitely softens and darkens in the Type 3X with the presence of oil. For the first time ever, a Type 3 has a closed case back made in polished grade 5 Titanium. Making the watch slimmer and consequently a better fit on the wrist.

Intuitive in viewing and motion, understated and philosophical in its aesthetics, the Type 3X is a perfect example of 21st-century watchmaking that celebrates optimism and a long-term perspective on the passage of time. 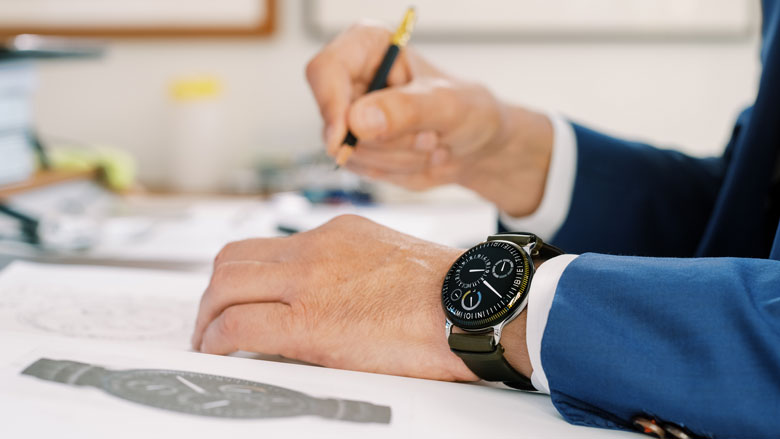