The time has finally come: 50 years since its introduction in 1969, this year marks the 50th anniversary of the El Primero caliber, as well as the anniversary of the first watch to feature the revolutionary movement, the El Primero A384. With its distinct and instantly recognizable design, the A384 brought a new sense of style and substance to the world of chronographs, becoming a collectible icon. Now, the El Primero A384 makes its return in the form of a Revival series. More than just a vintage inspired watch, the Revival is a historically accurate recreation of one of the most emblematic chronographs ever made. With its retro-futuristic styling, timeless proportions and emblematic chronograph caliber, the A384 is the final piece in the El Primero 50th Anniversary Revival series.

When the El Primero automatic chronograph caliber was first announced in 1969, it took the world of watchmaking by storm. It was the first automatic chronograph movement and brought forth a set of distinctive features, which have allowed it to stand the test of time and remain an exceptional movement half a century on: a high frequency of 36’000 vph, a column-wheel chronograph mechanism, and an automatic winding system that delivers 50 hours of power reserve.

Coinciding with the announcement of the movement in 1969, the first watch to house it was also announced: the Zenith El Primero A384. As groundbreaking as its movement was, the A384 also stood out with its original design. For the A384 Revival, Zenith sought to preserve and reproduce just about everything from the original watch by adopting a “reverse engineering” approach, where every component is faithful to the original. Each part of the original A384 from 1969 was digitized so as to be accurately reproduced, from the 37mm faceted steel case to the lacquered white and black tachymeter dial.

The only differences, or rather improvements, are the sapphire crystal instead of an acrylic glass, the display back replacing the solid steel caseback, and the latest version of the El Primero 400 chronograph movement, the culmination of half a century of gradual fine-tuning and perfecting. In keeping with its inherently retro appeal, the El Primero A384 Revival comes on a black alligator leather strap with a black rubber lining, completing the vintage look of the A384 with contemporary durability. An integrated metal “ladder” bracelet option is also available, mimicking the look of the one from the original 1969 El Primero A384.

Following the highly sought-after El Primero box set unveiled in January 2019, as well as A386 Revival series in three gold alloys announced during Baselworld, the A384 Revival will be produced as a special edition on the occasion of the 50th anniversary of the El Primero, marking the final piece of the El Primero Revival series paying tribute to iconic Zenith watches that first used the illustrious caliber. Unlike the A386, the A384 Revival is not produced in a limited edition, making it an exclusive yet attainable piece of El Primero history. 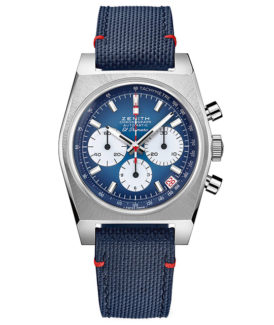