Through the Only Watch iteration, T-Rex has been shown to be perfectly capable of procreation. Looking back in time, its own point of genesis lies within an objet d’art from the desk of MB&F founder Maximilian Büsser, a whimsical combination of a shiny round holiday bauble mounted on metal appendages shaped like birds’ legs. When the time came to create the Co-Creation that was to become T-Rex, Büsser and designer Maximilian Maertens coalesced on this object. Somehow, this oddly thought-provoking blend of organic and inorganic elements incubated in the mind of Maertens, becoming bigger, stronger, more fantastical — more MB&F!

The legs of T-Rex are modelled directly on actual Tyrannosaurus Rex bones, using 3D scans of fossilized dinosaur skeletons as references to create verisimilitude in the final design. Alternating polished and sandblasted segments allow light to interact with the legs in such a way that make T-Rex seem agile and coiled to move, although the entire clock itself weighs approximately 2kg and its joints are fixed in place for stability. 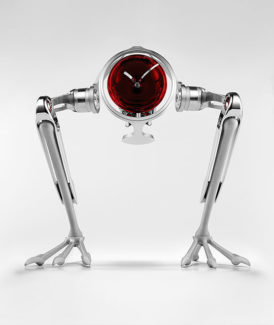