The ultimate in precision fused with consummate aesthetics – Glashütte’s watchmaking artistry never fails to charm. A maxim the Moritz Grossmann manufactory lives by wholeheartedly, taking it to the pinnacle of performance by manufacturing the hands in-house. Moritz Grossmann is one of a small circle of global manufacturers that has mastered this time-consuming, traditional craft and is now breathing new life into it. Manufacturing this essential element – literally the central character for displaying the time – is considered an art in itself.

This is certainly true for exquisite gold hands, which will preserve their superior value over decades and centuries to come. Grossmann’s skilled specialists spend an entire day perfecting a single set of hands by hand, including the hand bushings. This time-consuming procedure commences by milling and eroding the blank from a gold plate, the fine gold dust is also collected in the process.

The blank is then carefully ground all the way around using diamond files. Extraordinary skill, considerable patience and many years of experience are essential for shaping the contours and curves, and for smoothing and polishing all sides and surfaces down to the fractions of a millimetre. The hand finishers at Moritz Grossmann are only satisfied once the characteristic, fine tip of the silhouette is perfect.

The elaborate design of the hammer mechanism, known as the Hamatic for short, provides a stage for the strikingly crafted gold hammer head and reveals the fascinating mechanics and exceptional finish of Grossmann’s 106.0 movement. The oval hammer body is open in the middle, offering a clear view of the beauty of the highly sophisticated mechanism.

The new version of the Hamatic in 750/000 rose gold comes with a vintage style dial and is limited to 8 models worldwide. The dial has been given a new and exclusive finish. The surface was first painted in a black-anthracite color. The mirror-polished background on a German silver base was then treated with a finish called ‘black or’, which created a shiny black surface. 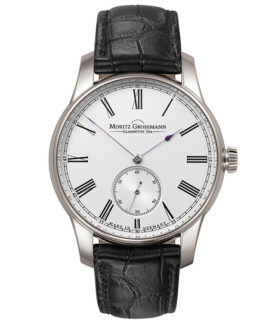