The elaborate design of the hammer mechanism, known as the Hamatic for short, provides a stage for the strikingly crafted gold hammer head and reveals the fascinating mechanics and exceptional finish of Grossmann’s 106.0 movement. The oval hammer body is open in the middle, offering a clear view of the beauty of the highly sophisticated mechanism.

The new version of the Hamatic in 750/000 white gold comes with a vintage style dial and is limited to 25 models worldwide. The dial has been given a new and exclusive finish. The surface was first painted in a black-anthracite color. The mirror-polished background on a German silver base was then treated with a finish called ‘black or’, which created a shiny black surface. 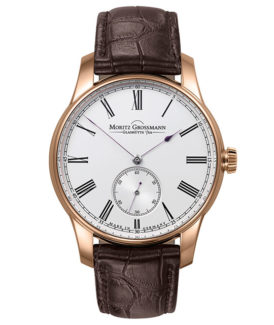