At the 7 o’clock position – another reference to the numeric theme that runs throughout LM FlyingT – is a dial of black or white lacquer that displays the hours and minutes with a pair of elegant serpentine hands in blued gold. The dial is inclined at a 50° tilt so that the time can be read only by the wearer, an intimate communication that highlights the personal nature of LM FlyingT.

On the reverse, the automatic winding rotor takes the shape of a three-dimensional red gold sun with sculpted rays, providing LM FlyingT with four days of power reserve.

LM FlyingT Inspirations: The creative process behind Legacy Machine FlyingT started four years ago, when Maximilian Büsser began thinking about making something inspired by the feminine influences in his life. Says Büsser, “I created MB&F to do what I believe in, making three-dimensional sculptural kinetic art pieces that give the time. I was creating for myself, which is the only way we could have made all these crazy and audacious pieces over the years. But at some point there came a desire to create something for the women in my family. I’ve been surrounded by their influence all my life, so I gave myself the challenge to do something for them.”

The intimate and personal nature of LM FlyingT led to the ultimate placement of the time indication at the 7 o’clock position on the dial plate, with the black or white lacquer dial tilted 50° to face the wearer. The message is subtle but clear – that whoever the owners and wearers of Legacy Machine FlyingT may be, their time belongs to them and no one else. 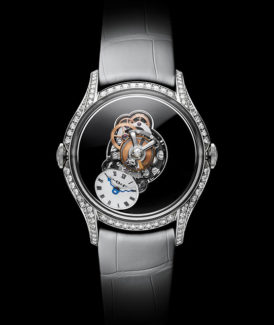