At the same time, curvilinear forms became more prominent, carrying the immediate promise of power and speed. The sophisticated computer modeling and wind-tunnel technology we have today were far-off dreams at that time – designers were guided more by their aesthetic sense than by any scientific precepts.

The Horological Machine N°9’Flow’ was launched in 2018 in two limited titanium editions of 33 pieces each: the “Air” version with darkened movement; the “Road” version with pink gold treated movement. 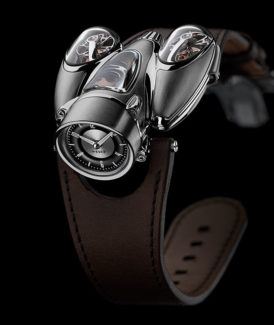