Iconic design, reinvented. Technical excellence. Refined elegance. Variety. The new 1966 Orion has it all. The timepiece is a modern twist on the classic 1966 collection with three ultra-thin cases and two different aventurine dial colors (one blue and one black) that conjure up a sky full of stars.

The timepiece pays tribute to the great epic in Greek mythology where the god Zeus places a giant huntsman among the stars as the constellation Orion. The three elegant interpretations in the collection are a poetic reference to the three bright stars alighting his belt. The aventurine dials recall the constellation, which include two of the ten brightest stars seen from Earth.

Chinese astronomers knew Orion as Shen, a great warrior doing battle in the sky with a belt of three stars. It is one of the rare cases where a constellation was visualized almost exactly the same way in China as Europe.

The domed surface increases the feeling of depth against the black or blue aventurine dials recalling a twinkling night sky. The contrast of the glittery aventurine with the silver, black or golden tones of the cases and indexes exudes the refined elegance of the 1966 collection. Available in steel, DLC-coated steel and rose gold, the collection offers a trilogy of variety.

Even more than its starry aesthetic, the 1966 Orion trilogy represents a triumph in watchmaking by successfully curving the thin aventurine dial into its domed shape. As brittle and delicate as glass, this is extremely difficult to achieve amongst even the finest and most skilled watchmakers.

The accomplishment proudly builds on the heritage of the 1966 collection, a period of pioneering feats for Girard-Perregaux in chronometry. From introducing the first high-frequency movement and launching the first quartz watch produced at an industrial scale to the many prizes received from the Neuchâtel Observatory.

The 1966 collection is renowned for its mechanical watches with round and ultra-thin cases, smoky dials, leaf-type hands and tapered hour-markers. The 1966 Orion trilogy is similarly slender with finely balanced lines paired with the reliability and precision of a self-winding movement. 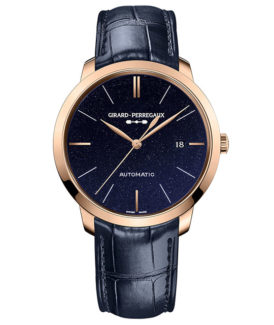 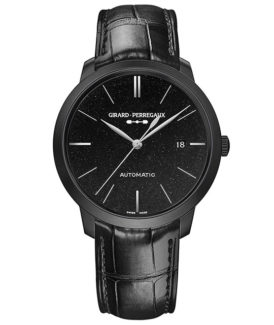