The dial features blue flinqué enamel with the Czapek-exclusive “Ricochet” guilloché pattern, which is inspired by a historical design created by François Czapek in the 1850s. Its unicity is due to possessing two focal points, corresponding to the two characteristics Czapek subdials and creating a fascinating “wave interference” movement in the dial.

This haute horlogerie mechanical caliber boasts 31 jewels. It is finely decorated and remains aesthetically and functionally true to the 1850 original. The architecture remains symmetrical, and the sandblasted finish is a modern interpretation of the ‘satiné frost’ technique used in the 19th Century – a process of gold plating using mercury evaporation. 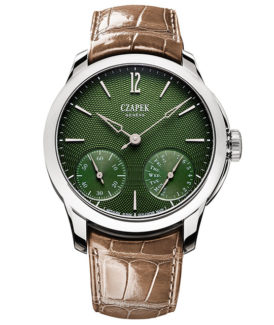 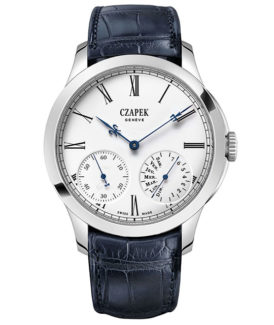