Issued in a limited edition of 1,000 pieces, this model features the special alarm function made famous by the 1968 Memovox Polaris watch. This 50th anniversary timepiece has an iconic three-crown design: one for setting the alarm (top), one for the inner rotating bezel (middle) and one for setting the time (bottom). The vintage cues on the dial call to mind the 1968 original – vanilla Super-LumiNova, trapezoidal indices mixed with four Arabic numbers – and the triangle in the dial center serving as the alarm indicator. Controlled by the alarm crown, the central disc turns to line up the triangle with the desired alarm time.

The Jaeger-LeCoultre caliber 956 features the striking mechanism with a gong, along with the central seconds and instant-jump date-change system. This caliber is a direct descendant of the first automatic alarm watch movement created by Jaeger-LeCoultre in the 1950s. Constantly improved, it still represents the ultimate in accuracy, robustness and reliability. This is a rare example of a movement that has been in production for more than 60 years after its creation, continuously updated and modernized. 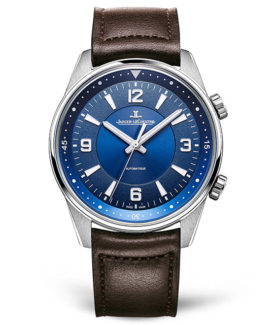