Externally, the lines of HM9-SV glide over the blueprint of its Road and Air-designated predecessors. The laws of fluid dynamics remain dominant in its design, although the hydro-governed objectives allow HM9-SV to take a more lenient approach to the sharp inward angles and parabolic curves of the previous Flow versions. From a technical standpoint, the reworked dimensions were necessary to account for the differences in material properties of sapphire crystal; although extremely hard, sapphire can fracture sharply under pressure whereas a metal would merely deform. The smoother lines of HM9-SV minimize potential areas of mechanical vulnerability – but they also reinforce its ocean-dweller’s aesthetic.

Performing the task of averaging the time measurement from the twin balances of the HM9 engine is a planetary differential, the gearbox of the movement, which then delivers a final reading to be displayed on the perpendicularly oriented dial. This complex mechanical computation was partially revealed in the original HM9 Flow, with sapphire crystal domes set over each balance and with a magnifying pane mounted above the planetary differential, visually emphasizing the importance of its chronometric role. In HM9-SV, every aspect of the engine is open to discovery; the eye can follow the interplay of components from barrel to balance, from differential to dial. 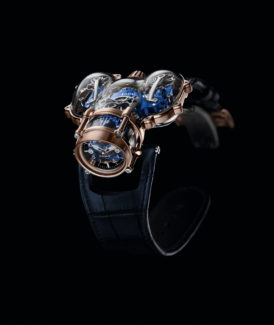