Bell & Ross’ saga started in an aircraft cockpit and was driven by the ambition of designing watches directly inspired by aeronautical instrumentation, the ultimate point of reference regarding precision, legibility and reliability.

In just a century, the aircraft has evolved from the Wright brothers’ biplane to the Rafale. Regardless of the era and the device itself, watches have always been a precious aid helping crews with navigation and providing operational support to pilots. The stakes are even higher when the aircrafts are involved in combat missions. This is why all military-inspired Bell & Ross watches comply with the strict specifications established by the armed forces.

The heritage between today’s Bell & Ross watches and their glorious predecessors is strong. So, when Bell & Ross decided to launch a watch collection in 2009 highlighting the key eras in aviation history, what name could be more apt than Heritage?

The distinctive feature of the BR Heritage collection is that it unifies its models, of varied forms and functions, around a common concept. Square, round, three-hand or chronograph, they all share the characteristic of expressing the passage of time through colors and a patina that give them a vintage look. Thanks to this aesthetic effect, and the combination of beige numerals on a black background designed by Bell & Ross, they have managed to introduce an iconic style into the watch market. Now, the flagship collection starts a new chapter with the BR V2-92 and BR V2-94 Steel Heritage. 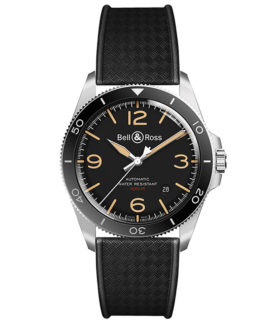